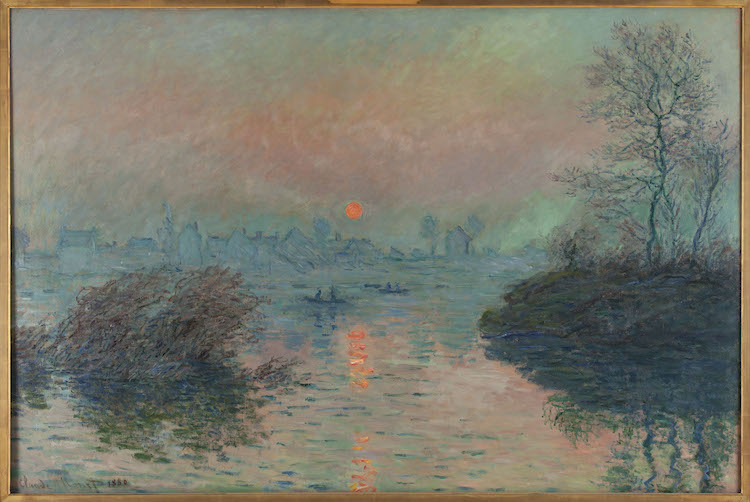 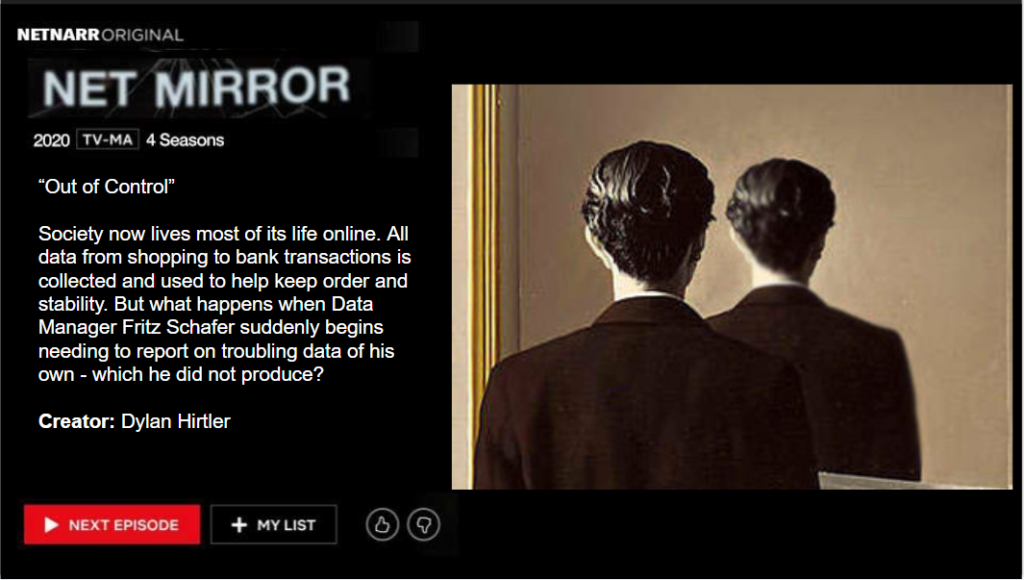 Humanity finds itself at a point in which data collection has become the newest transaction, but they have also, in as many ways, capitulated to their becoming a part of the deal. Every home is outfitted with a monitor with all ranges of data collection categories from more innocuous data points like sleep logs and meal journals, to ones which before would have been taken as private information like purchase orders and medication-taking. To fall in line with what constitutes “Normative Social and Personal Practices” one must meet the approval of certain workers titled as Data Managers. Data Managers are the shepherds to the hapless flocks of data now-wittingly sent to them, and it is on their judgment that those from whom the data originated should be rewarded or punished. But who watches the watchers? And what happens when one Data Manager finds himself coming face to face with data entirely his own, but which does not come from him? And what happens when the fiction of that data provokes a terrible consequence for the reality of the person tasked with reporting it?

“These are two of the most cynical attempts to undermine surveillance reform I’ve ever seen.” https://t.co/jaLOf8HB2N

Our main character is one Fritz Schafer. Fritz exists in a world of one, in which his notice of others and of himself can be boiled down to a sum of their digital parts represented by the data he is presented of them. Fritz is a Data Manager for the city of Nashville and is in charge of aggregating the data collected on all facets of modern life of those who, by chance, happen to reside simultaneously to him. He does not take much measure of pride in his work, as he does not take much measure of anything in anything, but he does believe that he performs his job satisfactorily.

Opposite Fritz is something of a doppelgänger; a procedural and categorical likeness to him produced outside of himself. Truly, for the first time in his life, Fritz is going to have to meet himself in a way without.

Our story takes place in Nashville, TN. Where once it was a city of music and life, it has become like many other places, a city of seclusion and mere individual existences. But the city with its past still feels unreachable from the looming present of Fritz’s apartment. The apartment, which holds all that could be a for a man who works every day from home and who seeks nothing beyond its walls, is the only place where all good and all bad could be found for a man like Fritz.

Fritz Schafer lives alone in his two bedroom apartment in Nashville, TN. It was never a question for Fritz that someday he would make use of the living space which currently serves only to increase the proportion of emptiness he may or may not discern in his life, it had just become more of a staple of the space that he should be alone in it. The apartment rested imperceptibly among the others in its block, the block itself mirroring its parts as one of a larger series of blocks, and all of it very much unimportant to Fritz who, like others who took up not enough space in the Data Employee ward of Nashville Apartments Square 33, paid no particular mind to any of it. It was for him as it was for all the rest as it was for the apartments themselves and the sparse trees which littered the pathways with their gasps at life and their remembrances, generally unimportant. Fritz would from time to time sleep in either room as both held computers for different needs for Fritz’s job as a Data Manager for the city of Nashville. Fritz believed to himself that his time had come and perhaps had gone for when he may be promoted to Data Manager of greater Tennessee but these dissonant thoughts had likewise come and perhaps had gone. There was not much music to speak of in Fritz’s life and he could just as soon have not known what the city in which he resides was known for not that long ago, but then Fritz and many like him would not have cared much for it. 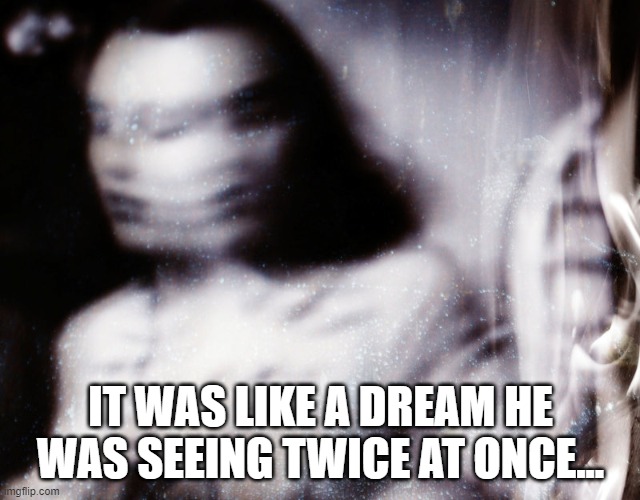 Fritz would on this day wake up as was typical for him at 6:45am and log his sleeping hours into the city data bank. It would award him one of his day’s only pleasures to see the 15 minute Early-Riser pop-up in the corner of the screen as he knew with not many more would he be given his $25 bonus. He paid no mind to the concrete silence of what was otherwise a soft morning which may, had it not been for the closed windows and perpetually-drawn blinds, have offered him a world still open while he, and his apartment, and his outlook on things, remained closed. It was a silence that could have even made the man afraid; could have made him grasp for sound even if he was past the point of producing it himself. Nothing on earth could have survived the silence that knew of its existence. Luckily, though, 25 extra representations of what paper currency went out of style years prior did serve to drown out that silence for Fritz, and the apartment kept singing its absence.

After a meager breakfast Fritz would continue his day in what typical way he would of pausing the continuity of his life by opening the blinds in his bedroom and stepping out onto the balcony of his apartment to take in his daily allotted six minutes of open-air time for the record. Strangely that day, however, Fritz noticed that his blinds were already open when he finished washing his dishes. His window, though, was not open, and as between the two the window needed to be manually opened while the blinds were set to open remotely from a schedule in his phone, he for that time simply believed that there had been a minor error in the handling of his device and that the incident was of no particular consequence. 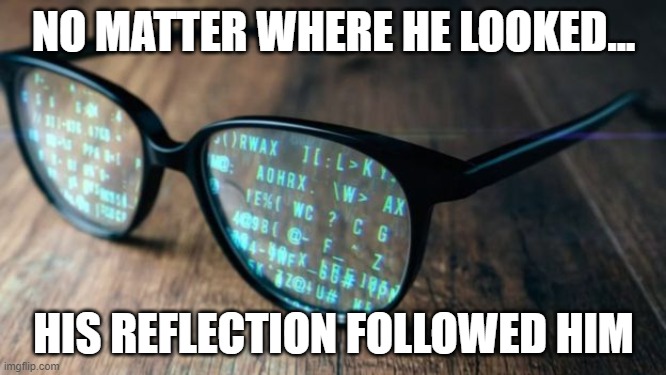 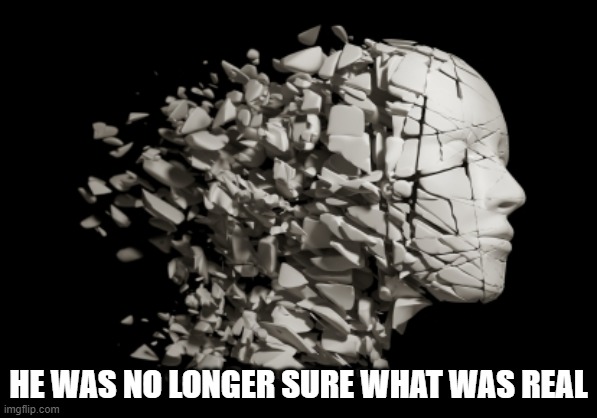 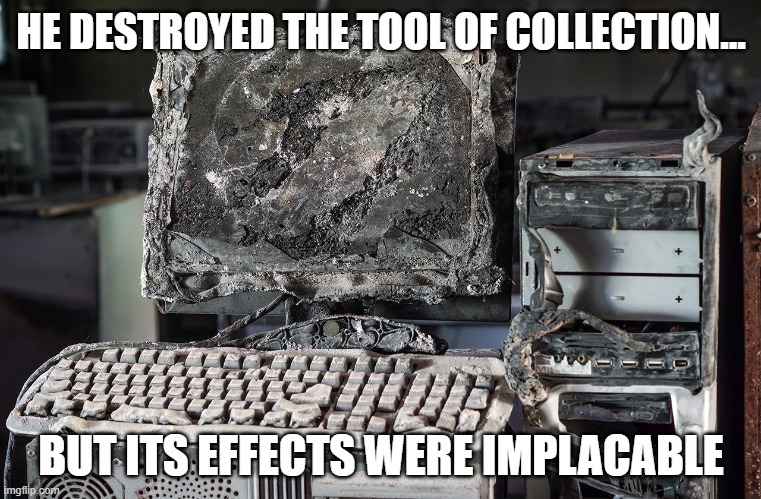 This work by Dylan Hirtler is licensed under a Creative Commons CC-BY Attribution 4.0 International License.