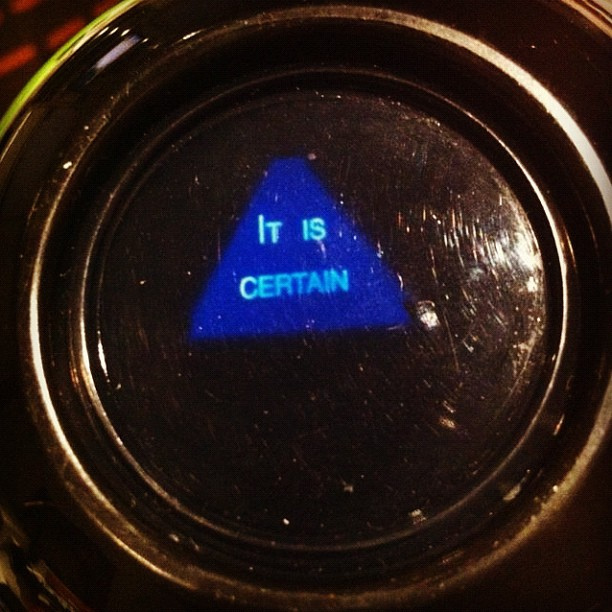 The Future Is… Yesterday

With everything happening today in the media about security breaching and information leaking out to various companies and countries, it is hard to ignore what that means when all of us have a digital presence online. Would we have signed up for certain websites, like MySpace or Facebook, had we known their permanence and digital tracking would be so prevalent. Everything we put online has consequences, whether we like to believe it or not. My project aims to reimagine those moments of the birth of our digital footprint, as well as how those naive moments have futuristic consequences for us today, and beyond.

For my e-lit piece, I want my concept to focus on cause & effect in the world of technology. In doing so, I want to create a generative text piece that includes hyperlink navigation throughout. The framework of the piece will be inside a magic 8-ball, as if you were back in the 90s before any of us had a real digital footprint. Each time you shake the magic 8-ball, a scenario will pop-up: for example,

“You lay in bed, watching the news… a sweaty, nervous-looking man is on the television, trying to answer questions that are as ineffective as his responses. Angry, older political figures, dressed in black, stutter through questions that they do not know the real meaning of… data  security “this,” personal info leaking “that…”  The nervous man says something about cookies, which even you do not fully grasp— you see it all the time when visiting pages on the Internet. Anyways, the only thing you’re getting from this is that everyone is afraid of this man and what information he is sharing about you for money.”

I want the scenario to read as vague— vague enough for people to realize what it might be, but vague enough so that your “kid self” would not really be able to predict the specifics of the future. In this case, the magic 8-ball reveals the trial Mark Zuckerberg was on for Facebook, and how our information might be being shared for reasons we are not aware of.

Additionally, each scenario will have certain words as hyperlinks to link to another scenario that relates to it, much like the hypertext fiction that is Twelve Blue by Michael Joyce. If readers do not want to click on the words, they can also refresh the page for another scenario to generate instead.

Ultimately, this piece of electronic literature will explore familiar scenarios of us creating parts of our digital footprint for the first time (setting up a Facebook account, posting a YouTube video, ect.), and how that action could have a consequence in the future. For example, if you created a MySpace page, who you were back then is then permanently stuck in time for anyone to be able to Google search (if you never deleted it). Also, it will explore the creation of what all of this could mean even further down the road— what will become of your Instagram account after you are dead? Will it be in an art museum? Would it become a part of an anthropological study?

In the moment, a lot of us do not think what our digital footprint will mean, because a lot of us are innocent and naïve to the tracking and data breaching that exists in this reality. A lot of this is coming to light now, which is why I believe this would be an important piece to create & allow the reader to explore.

This work by Hailey Carone, @stryii is licensed under a Creative Commons CC-BY Attribution 4.0 International License.

My Story Begins With a Selfie