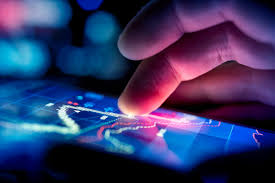 The Mysterious Effects of Games

My project will be based on the E-Literature example of a Soliloquy. For this project I plan to do an outline of an idea based on how games have an effect on behavior. My project will revolve around the concept of how games change a child’s behavior over a week’s time when they are told to play games everyday for about twelve hours consecutively. There will also be an incident that occurs and what effect that has on the children. For the first couple days they would be given an option of games to play and then at the end of the second day they have to pick a game that they enjoy the most. Once that happens they have to play that game for hours on end until the end of the week.

This project involves characters of an age range from 8-19 years old. I would have three girls and three boys. The first girl would be 8 years old, the second would be 10, and the last one would be 19. For the boys one would be 6, the second one would be 16, and the last one would be 19 years old. These children would be playing the games out of the comfort of their own home. This allows the children to be comfortable and relaxed, that way it provides accurate research on their behavior. Then after some time of them playing these games, towards the end of the week they will be told that they are not allowed to play any type of games anymore to determine the effect games had on them in the short period of time, if there was even any effect. Then after that is completed I would have to analyze the effect it had on them at school, with friends, and at home, if there was any changes. This would be the only way that I would be able to determine the impact it has on society at large. If a child negatively reacts then they may act out at school or with their parents and they could even become more aggressive. It could also have a positive effect where the child uses games as an escape or it stimulates their brain more.

Digital technology plays an important part in society and in everyone’s life. Everyday we are always somehow connected with technology whether it be through work, games, literature, news, etc. The soliloquy is a great way to express my idea because I can easily break down the work in an organized way. It is an easy way to have the characters record themselves and their experience and then transcribe it into a fun digital text. It allows the digital text to be more interesting and just a fun way to explore what was being said and what it is about to someone who is reading it for the first time. Having to click around on a document to figure out what it is saying makes it into a puzzle game for literature.

Below is a picture example of how my E-Literature would look like because I couldn’t find the right tools or site where I could create this type of E-Literature: 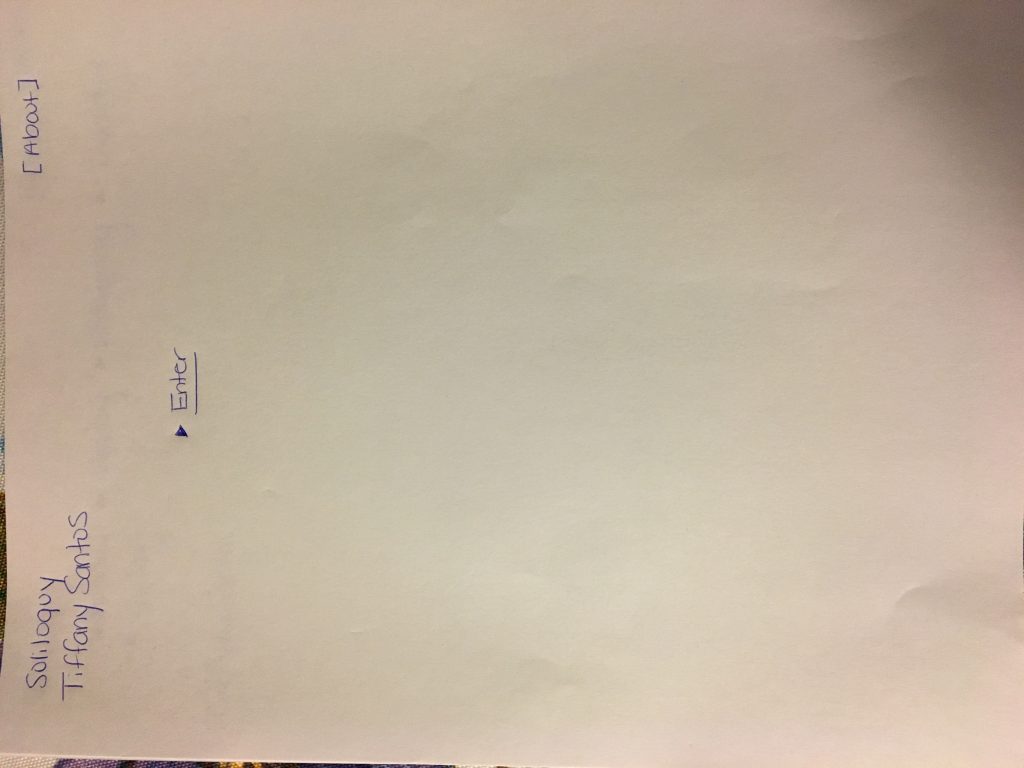 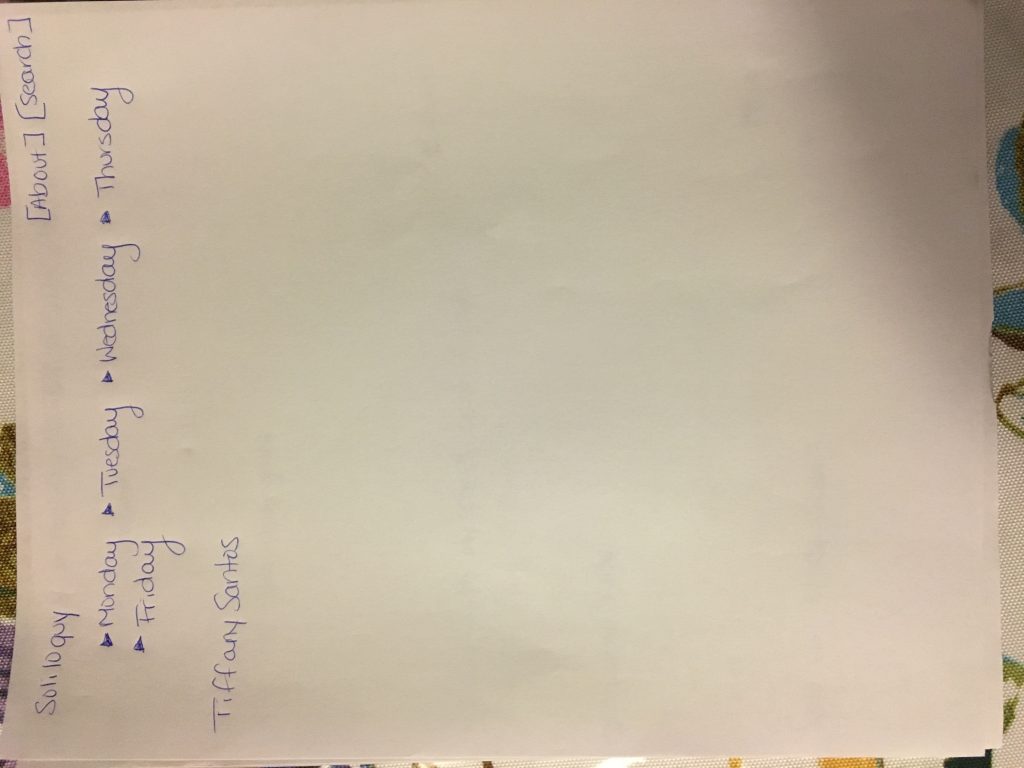 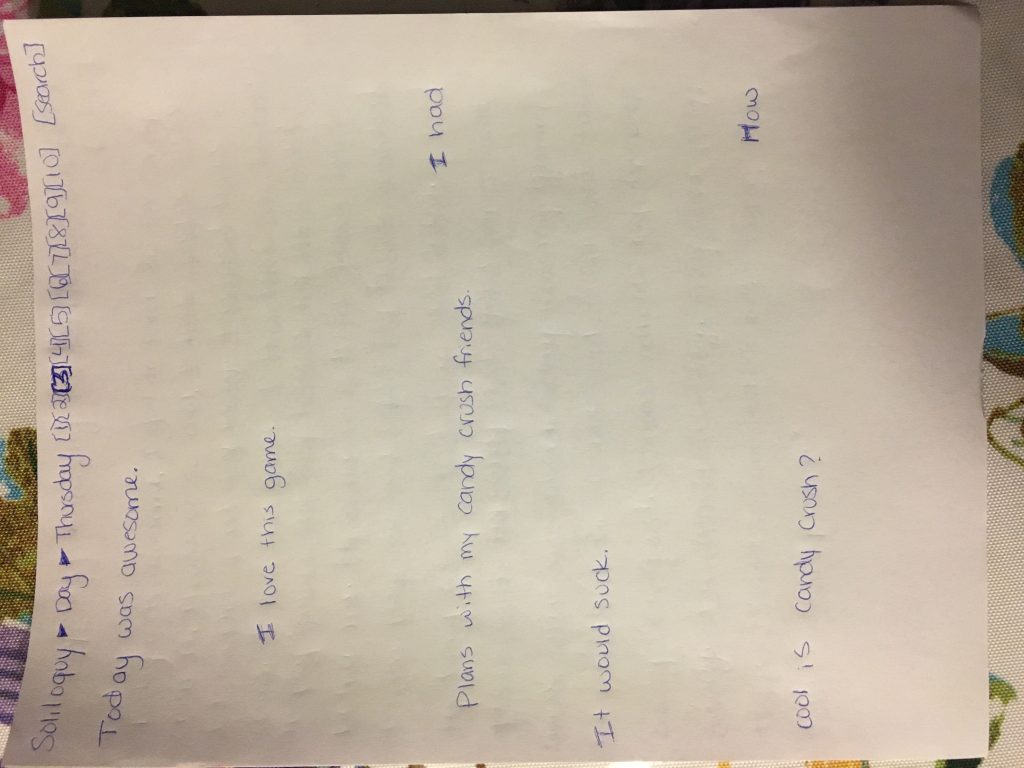 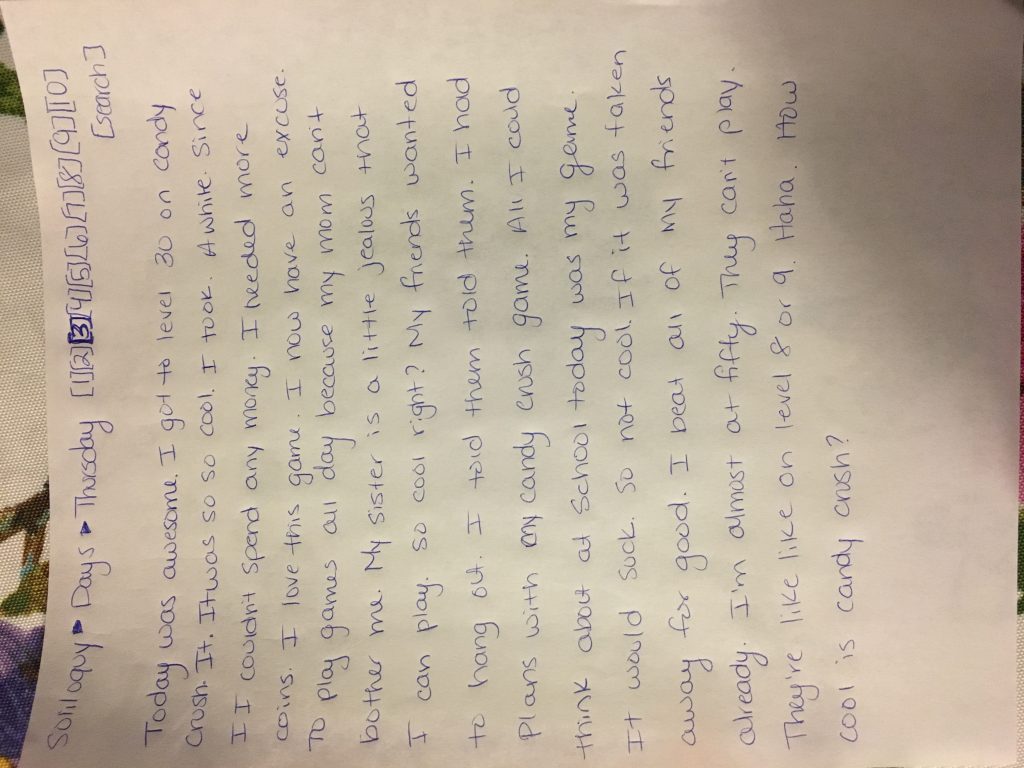 This work by @tiffsanto is licensed under a Creative Commons CC-BY Attribution 4.0 International License.